At Creighton University, we want health sciences students to work in a wide variety of clinical settings with diverse patient populations. That’s why we are expanding our suite of health sciences degree programs in Phoenix with a new campus and an alliance with Arizona-based health care systems and hospitals.

Soon-to-be the largest Catholic health professions educator in the nation, Creighton University is preparing students for a workforce that demands their commitment to innovative care and service.

New Health Sciences Campus
The 183,000-square-foot Phoenix campus is expected to open in 2021 at Park Central in midtown Phoenix. When completed, the campus will be home to a four-year medical school and will accommodate nearly 900 students, including future physicians, nurses, occupational therapists, physical therapists, pharmacists and physician assistants.

The modern facility—to feature cutting-edge technology, equipment and spaces—will enrich Creighton’s Jesuit education. On campus and in the community, students will have opportunities to develop skills and transform health care.

“Creighton University has long had a presence in Greater Phoenix, and its decision to continue expanding here is an indication of the growth and demand we’re seeing in the industry regionally. Creighton’s impact on our market thus far has been significant, and we only anticipate it will increase.”
— Chris Camacho, President and CEO, Greater Phoenix Economic Council

Construction Details
Construction work is underway in Phoenix’s Park Central district for a new $100 million, 183,000 square-foot health sciences campus.
The seven-story facility, slated for completion by 2021, will create a home for 900 students, adding first- and second-year professional students to those in their third and fourth years already learning in the field at nearby Dignity St. Joseph’s Hospital and Medical Center.
The project is also the centerpiece of a significant redevelopment project for one of the city’s iconic properties, transforming what was the city’s first retail shopping mall, Park Central.

Plaza Cos. is working with Tucson-based Holualoa Cos. to redevelop Park Central Mall into office and retail space on a campus that will include the medical school and a 278-unit apartment community.

Our Programs in Phoenix
Creighton medical school students have studied in Phoenix since 2007. In 2009, Creighton expanded its partnership with St. Joseph’s Hospital and Medical Center in Phoenix by opening a Creighton campus there for third- and fourth-year medical students. After spending their first two years of medical school training in Omaha, students can enter a lottery to be one of 48 students to finish their final two years at the Phoenix campus. The clinical training at either campus prepares students for highly competitive and prestigious residencies nationwide.

Omaha native Britney Bell, BSCHM’13, MD’18, completed her last two years of medical school in Phoenix and stayed in the city for her residency. “I wanted to experience the difference in population and the diversity that Phoenix offered,” she said. “It surprised me how much the city ended up feeling like home.”

Creighton offers one of the nation’s most successful and longest running accelerated nursing programs—now in Phoenix. The accelerated BSN program prepares students to be career-ready in just 12 months. The Phoenix campus will also house programs for physical therapy, occupational therapy, pharmacy and physician assistant training.

Meeting a Need
Creighton’s infusion of health professionals comes at a crucial time for Arizona, which faces a boom in population and a shortfall in physicians, nurses and other medical professionals. By 2030, the state is expected to have just one primary care doctor for every 1,500 people and a projected shortage of 50,000 nurses. Arizona needs more compassionate, well-trained professionals to meet the growing health demands of an aging population as well as new generations of Arizonans.

Our Arizona History
For more than a decade, Creighton University has been an academic mainstay in Phoenix, sending medical students to Dignity Health St. Joseph’s Hospital and Medical Center for education and clinical training. St. Joseph’s is home to the internationally renowned Barrow Neurological Institute, the Norton Thoracic Institute, Center for Women’s Health, University of Arizona Cancer Center at St. Joseph’s and a Level I Trauma Center.

Since Creighton began its presence in Phoenix, a growing number of Creighton-educated physicians have stayed in Arizona for their residency programs. Creighton also has a large network of health sciences alumni throughout the state.

Partnerships in Arizona
The Creighton University Arizona Health Education Alliance is a partnership between Creighton University, Dignity Health St. Joseph’s Hospital and Medical Center, District Medical Group and Valleywise Health to better serve the underserved populations of Arizona. The Creighton Alliance aims to increase the number of physicians and other health care professionals in Arizona by improving and expanding graduate medical education (GME) programs. Through this partnership, Creighton’s School of Medicine now offers more than 30 residency and fellowship programs in Phoenix and Omaha.

As one of Arizona’s largest GME providers, the Creighton Alliance is an opportunity for future generations of medical professionals to be health care leaders in the Southwest.

Creighton Nursing in Phoenix
To help meet the growing demand for well-educated nurses in Arizona, Creighton launched its Accelerated Bachelor of Science in Nursing (BSN) program in Phoenix through a partnership between Creighton University and Dignity Health St. Joseph’s Hospital and Medical Center in 2018.

This fully-accredited program is ideal for those who already have a college degree and are looking to earn their BSN via an accelerated, 12-month program. As part of the program, you’ll complete clinical experiences at Dignity Health Phoenix-based hospitals, Valleywise Health and Phoenix Children’s Hospital as well as with other community partners and clinics. Classes start each August and January in Phoenix.

Doctor of Physical Therapy – Phoenix, AZ
First enrollment planned for the Fall of 2022.

Mission
Improve lives and society through a commitment to exemplary physical therapist education, research and service, within the Jesuit tradition.

Program Description
The plan is to have two separately accredited Doctor of Physical Therapy Programs one located in Omaha, NE and a new program coming to Phoenix, AZ with a single mission and a shared curriculum.

The Phoenix program will build upon the Omaha program’s long history of excellence in Doctor of Physical Therapy education.

The Phoenix program will incorporate Ignation values. The curriculum will be both learner and patient centered; it will include authentic learning experiences, promote adaptive learning, and strong clinical reasoning. In addition, interprofessional collaborative practice and innovation will be a focus.

The program will be a part of the Creighton University Arizona Health Education Alliance with close relationships to Dignity St. Joseph’s Hospital and Medical Center, Valleywise Health, and District Medical Group, Inc.

Making an Impact
A transformation is about to take place in Arizona’s health care landscape, along with a substantial boost the local economy. The 180,000-square-foot health sciences campus, scheduled to open in 2021, will address growing shortages of Arizona health care professionals while sparking significant economic growth throughout the region. 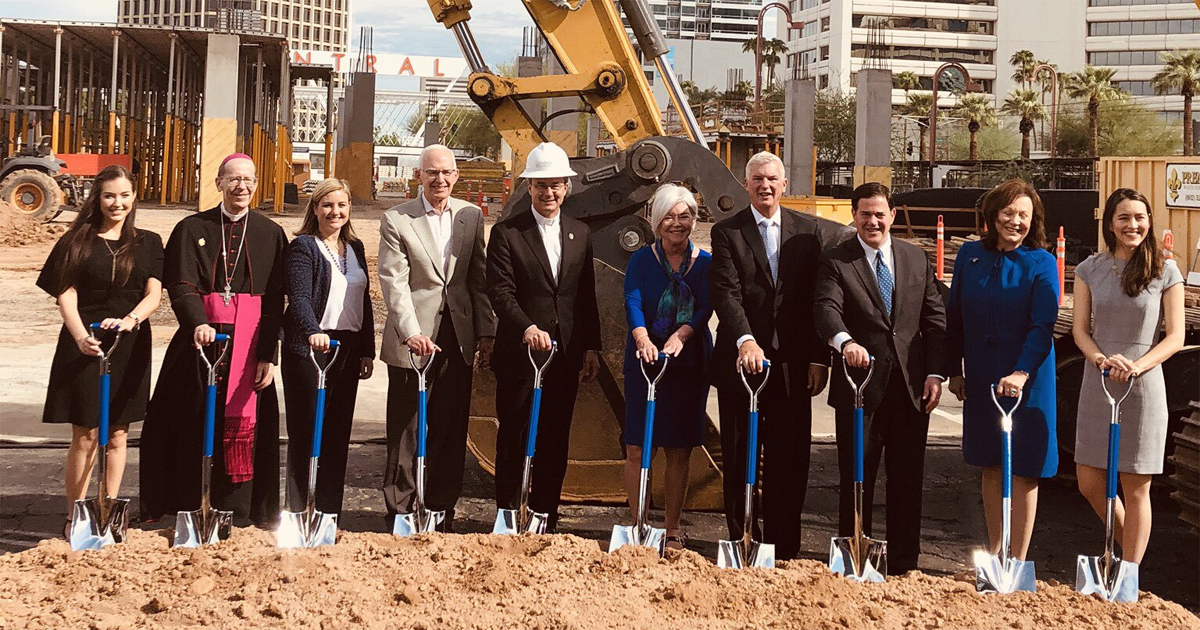